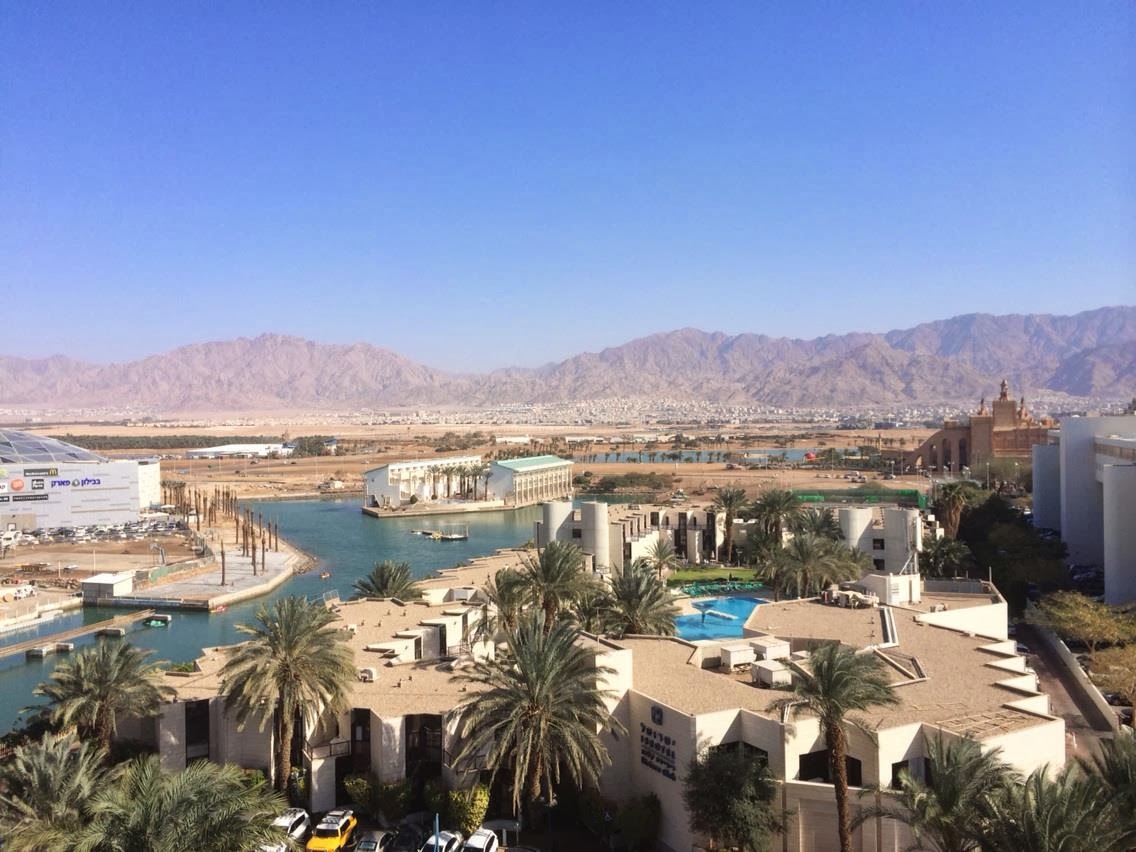 If you missed Part 1 and Part 2 of this special series of articles from Israman triathlon in Eliat, Israel, I'd highly recommend you go and read them, especially if you want to impress your friends with interesting tidbits about this part of the world, or get your mouth watering over Mediterranean cuisine.

In this article, I'm going to get into the nitty-gritty of the Israman triathlon itself. If you've every thought about doing this race, or want a sneak peek into what one of the hardest Half Ironman and Ironman triathlons on the face of the planet is like, then keep reading.

Or if you just want to find out how to stand on a bike for 20 miles, make your feet bleed and pound downhills until your quads are weeping, you can also keep reading. Below are my top 10 tips for racing Israman triathlon. 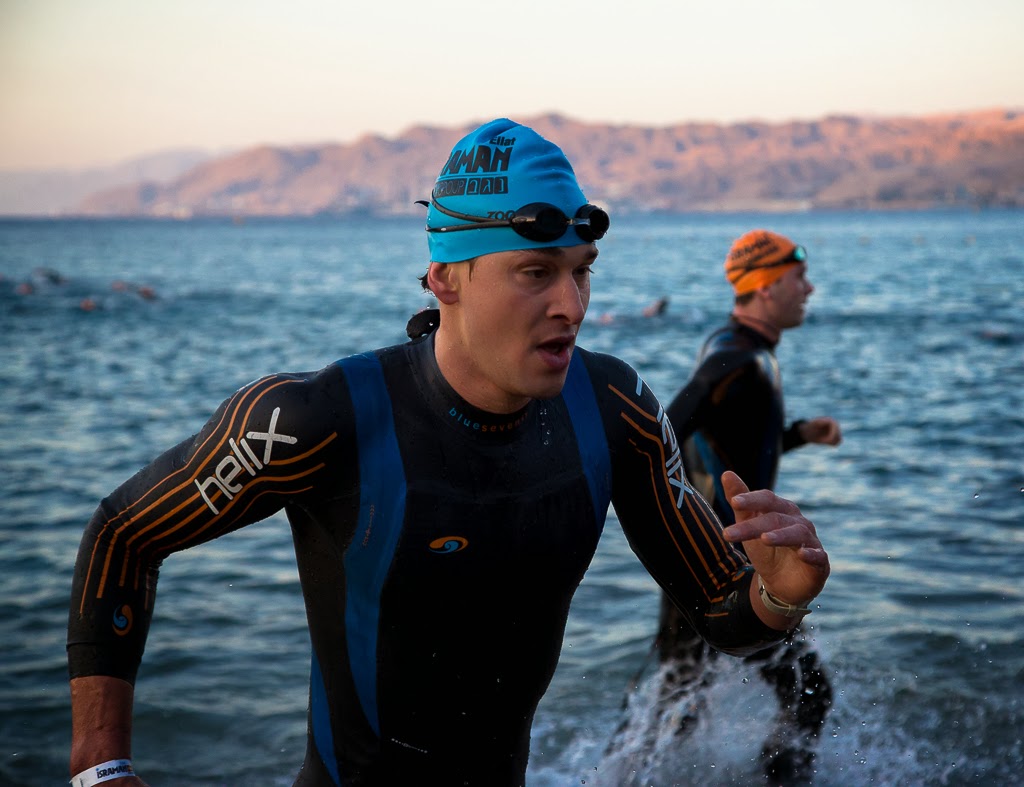 You're going to experience a few tough moments during the race. The air temperature and water is a little chilly on race morning. It's still dark out when you start swimming. The first 20K of the bike is nearly all steep climbing. T1 is in a different place than T2, which means you climb and climb on the bike...but never get the dessert: descending. There's a lot of wind. You bike and run in exposed desert.

Israman is cold in the morning. Then you climb into the mountains, where headwinds and crosswinds and elevation drop the temperature even further. Then you finish with a run that starts in the cold mountains but ends in the hot desert along the Red Sea. So bring gloves, arm warmers, leg warmers (unless you have hairy legs like me) and a coat or wind jacket. Sunscreen and chapstick are not bad ideas either. I used none of the items just listed and probably should have. 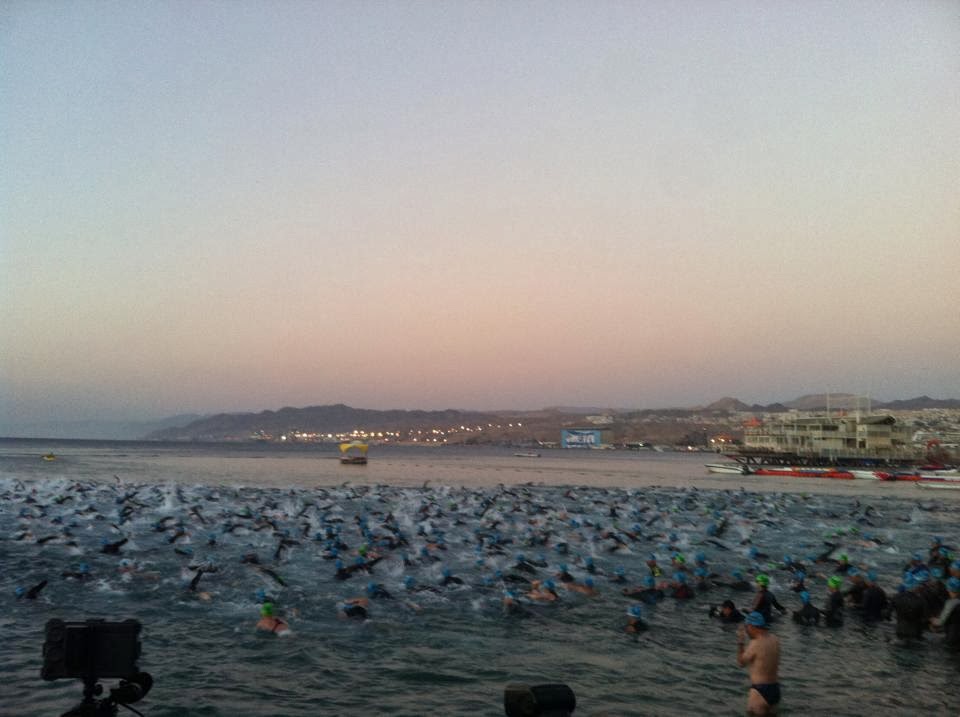 If you show up in your swimsuit, skinsuit, speedsuit, speedo, banana hammock, budgy smuggler, ballbushka, or any other form of skimpy swimwear, be prepared to shiver hard. This race is wetsuit legal. So bring your wetsuit. No need for a neoprene cap or anything like that, and the water is crystal clear and smooth to boot. But it is a bit chilly due to the early 6:15-6:30am-ish race start.

4. Get Ready To Climb

As I've alluded to earlier, you ride from the Red Sea straight up into the mountains. The race opens with nearly 20km of climbing with an elevation gain of 700m, and a total elevation during the race of over 3000m (that's for the Iron distance and the Half is more than half that). As last year and this year's winner Petr Vabrousek reported on Slowtwitch: 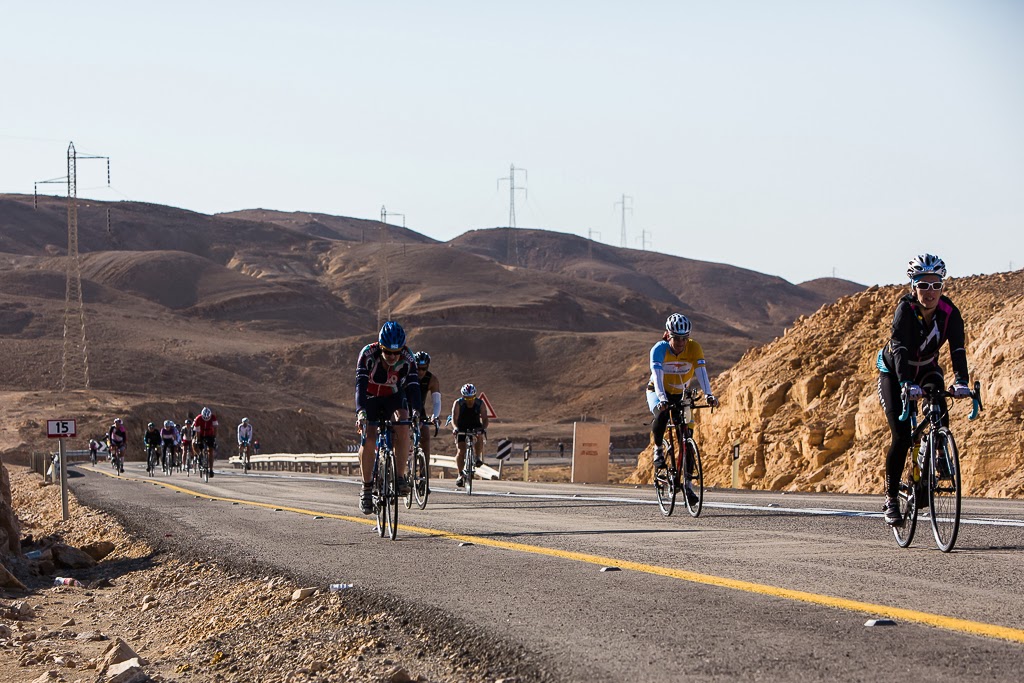 "Everyone knows the climbs are tough - 10,000 feet of elevation gain matches the toughest tests in the sport," he said. "But today the desert side winds were brutal. Today there were times when I was riding hard but felt I was standing still. Another factor that makes this race so hard is the bike to run transition is still at 600 meters of elevation. So you don't get the advantage of a long downhill to finish the bike."

That 600 meters downhill starts the run and that declivity takes place over 10 precipitous kilometers. "When you start the run on such a speed downhill, you trash your legs," he said. "People may think that is easy, but with my 80 kilograms weight, my quads are screaming. My feet are screaming. Once I hit the flat, your speed is gone and all you have left is will. Usually I race in very light shoes, but here I ran in my heavy training shoes to absorb the punishment."

Just face it - you're going to be slower than you expect during the bike ride. A lot slower. For example, 40K of a ride usually takes me about an hour and in this race, it was nearly double that. So don't watch your clock or you'll be disappointed in yourself. A power meter would be fine, but consider keeping the clock off or putting a bit of electrical tape on it.

Then just ride and pay attention to the topography and your gearing, and don't let your time get you down. I think my bike split was about 3 hours and 30 minutes - a good hour longer than my usual Half-Ironman bike split - and you can chalk much of that up to the pure difficulty of the bike course. Every time you think you're done climbing, there's simply another hill!

Like I mentioned earlier: you're going to run downhill at Israman. A lot. And it's steep. The first 10K or so of the entire half-marathon and marathon are straight down a road carved into the side of a mountain.

Your quads are going to take a beating from the constant "braking" you have to do during a downhill run, so send them some warnings in your training. Run steep downhills. Do some hard pounding with a treadmill at 0.0 incline. Strengthen the quads just a bit with some squats, lunges, and even leg extension machine at the gym. Your body will thank you later. And by all means, come prepared with the proper downhill running gear, which brings me to my next point...

I wore my usual shoe choice: my minimalist Skora racing flats with elastic shoe laces. These are great for speed, but don't offer much in the way of cushioning or tightness. So once I began pounding the downhill, it took about 5K for the bottom of both my heels to get rubbed raw as my feet slide around in my shoes. So I ended up walking and even running backwards for the next 5K.

A better shoe choice would be a slightly more cushioned shoe, and then non-elastic shoelaces that allow for a tigher lace-up. Just sayin'. The picture below shows my awesome, yet inappropriate, shoes. 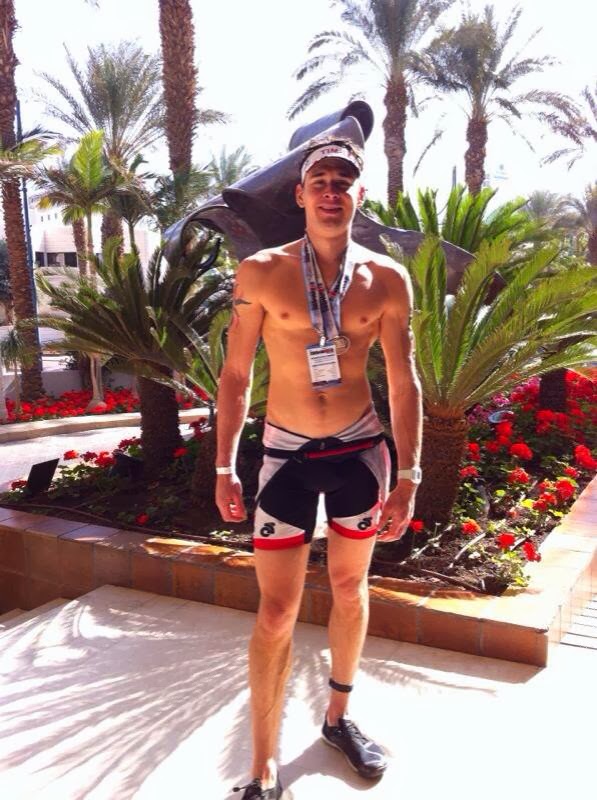 So once you finish the chilly open water swim in the Red Sea, the steep climb into the mountains above Eliat, and the intense downhill running, that last part of the run should be a breeze, right? Not quite. It's only over when it's over - and the final sections of the run include flat but heat-exposed pavement pounding along the promenade that lines the Red Sea. It's beautiful, but by the this point you're physically and mentally beat up, and leg turnover is hard to maintain.

I recommend you pull out my second trick once you get here: count your steps. I counted to 100 over and over again, trying to ignore the stabbing pains in both feet with each step.

Finally...the finish line! Keep your eyes open if you're an early finisher, because once you reach the finish line chute, there's a guy with a bucket of little flags that represent each country. Take the time to stop and grab the tiny flag so you can carry it proudly across the finish line.

Warning: even a tiny flag feels very heavy at the end of Israman!

For those of you who had watering mouths reading my previous description of Mediterranean cuisine...

And for those of you concerned that Hummus, Falafel and Baklava may not hit the spot after several hours of racing in the desert...

Thanks to my gracious host for the trip (Vibe Israel) I was able to punish a gluten-free hamburger with the works: ketchup, mayonnaise, mustard and pickles. Thank you for that, America. And of course, there was some nice Italian gelato to wash it all down.

Bon appetit, and leave your questions, comments and feedback about the Israman triathlon below. I promise to answer any of your questions about race preparation, aid stations, fueling, course logistics, or anything else. Just promise me you'll think about racing this one - it's well worth the trip!
Posted by Unknown at 10:04 PM

Anybody needing to make a way of life change needs to consider every one of the zones influenced by that change. While most aftereffects of practicing are sure, it's normal to address if the body encounters any potential negative results to practice programs like substantial weightlifting.
DOES HEAVY WEIGHTLIFTING CAUSE HAIR LOSS?

So is possible that HIV Disease can be cured because I have been scammed so many times not until I came across this great man herbalist Dr Akhigbe who helped me at first I never believe all this comment and post about him and I was very sick because I have been infected with HIV/AIDS for the past two year,just last 2 months I keep reading the testimony about this man named Dr Akhigbe they said that the man is so powerful he have cured different type of diseases, I keep monitoring his post of some people about this man and I found out that he was real so I decided to give him a trial I contacted him for help and he said he was going to help me get my cure that all I needed to do was to send him money to prepare the medication after which it will be sent to me via DHL courier delivery services which I did to my greatest surprise the medication was sent to me he gave me instructions to follow on how to drink it that after  three weeks I should go for check up,after taking the medicine and follow his instruction after three weeks I went back to the hospital for another test, at first I was shocked when the doctor told me that I was  negative I ask the doctor to check again and the result was still the same negative that was how I free from  HIV VIRUS at of the shock I decided to come and share my own testimony with you for those who think there is no cure for HIV VIRUS the cure as finally come'  out stop doubting and contact Dr Akhigbe via email drrealakhigbe@gmail.com he will help you out you can also whats App him via +2348142454860 he is also perfect in curing DIABETICS,HERPES,HIV/AIDS, ;ALS,  CANCER , MALARIA , BACTERIA DIARRHEA, MENINGITIS,HEPATITIS A AND B,ASTHMA, HEART DISEASE, CHRONIC DISEASE. NAUSEA VOMITING OR DIARRHEA, KIDNEY DISEASE,, SCHIZOPHRENIA, LUPUS,EXTERNAL INFECTION, COMMON COLD, JOINT PAIN, OSTEOPOROSIS, RABIES RHEUMATISM, THYROID, GALLSTONE, COLD & FLU, DENGUE, HUNTINGTON'S DISEASE, CIRRHOSIS, DENGUE FEVER, EPILEPSY,STROKE,TUBERCULOSIS ,STOMACH DISEASE. ECZEMA, PROGERIA, EATING DISORDER, LOWER RESPIRATORY INFECTION. etc believe me that deadly disease is not longer a deadly sentence because dr akhigbe has the cure.the godfather of herbal root.email: drrealakhigbe@gmail.com         whatsapp number.  +2349010754824 website: https://drrealakhigbe.weebly.com 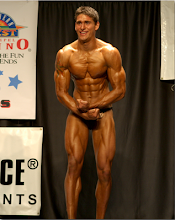 Ben Greenfield is the Get-Fit Guy! 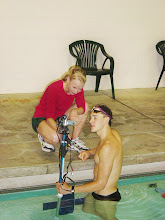 Get Ben Greenfield Triathlon Adventures as a Hardcover Book!